Based on the MANGA series by the artist GO NAGAI, creator of Mazinger Z, GREAT MAZINGER, UFO ROBOT GRENDIZER and many more.
Z MAZINGER was published in 1999 and is a revisited story of MAZINGER Z, mixing greek mythology and technology.
From deep space, Dr. HELL is back and plan to destroy the human race using a legion of powerful robots, God Zeus is prepared to help and rescue our planet, for this he creates a robot, Z MAZINGER, piloted by KOJI KABUTO, later helped by APHRODITE piloted by Sayaka, and other well-known characters from the mazinger universe, they will fight the invading army.
Fights in Z MAZINGER are of epic proportions, and GO NAGAI surpassed himself by designing surprising and highly detailed mecha villains that fans won’t forget. 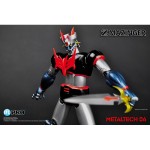